When the weather forecast predicts heavy rain and damaging winds, you know you are only going to get the hardiest of kids at a ski event on such a day.  To top things off, limited snow cover added to a challenging experience for all, with a narrow strip of snow allowing for a short return course to be set.  However on Saturday 29 June, twelve skiers and their families braved the conditions to participate in the 58th Paddy Pallin Juniors and although the wind was cold and gusty, the weather gods held off on the rain, with an occasional shimmer of sunshine. 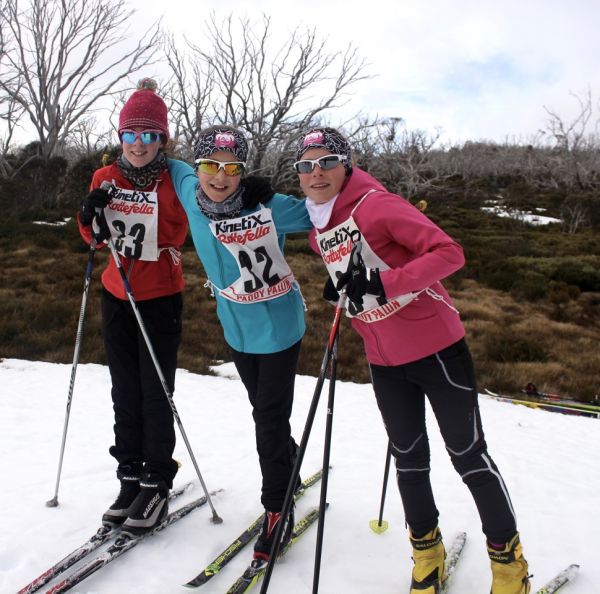 To see other great photo's in the PXC Photo Gallery, CLICK HERE

Participants ranged in age from three to fourteen, and distances skied were adjusted accordingly.  The youngest skiers were accompanied by an adult and skied approximately 30 metres.  The skiers in this category planned a finish together, much to the delight of other competitors.  The five and six year olds skied 100 metres and congratulated each other at the completion of their ski, while the seven to eleven year old skied 600 metres, with a show of lovely sportsmanship from Christian Moon who slowed towards the end of the course to finish with his good friend Ciaran Brennan. The oldest competitor, Harriet Greville, braved the elements for 1.6 kilometres with multiple laps of the narrow course.

A hot dog lunch, supplied by sponsors Paddy Pallin and Perisher Supermarket, was served in the Nordic Shelter, followed by a presentation of certificates and fantastic spot prizes supplied by Paddy Pallin.  Skiers then formed teams for the traditional jelly snake hunt on skis – a sure-fire way to put on a smile on the face of every skier!

The event would not happen without the ongoing support of our major sponsor Paddy Pallin and the additional support provided by the Perisher Supermarket, Geraldine and Arnold at the Nordic Shelter and parents and volunteers, with special mention of Kate Greenwood and Peter Heeley who continue to support the event even though their own children are now too old to compete.  Times achieved by participants as follows: